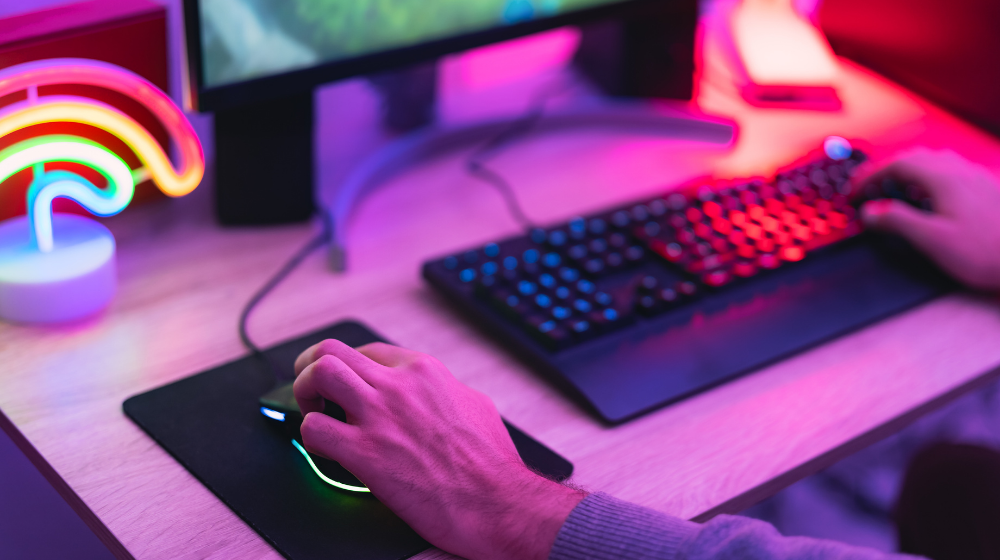 So you like gaming. But chances are you have some other interests or areas of expertise too. Maybe you’re a great cook. A fitness freak. Have your Master’s in psychology. You have a soothing voice and a penchant for storytelling.

You get the idea.

This is all fuel that you can use to build a successful gaming YouTube channel.

Why? Because anyone can turn on their camera and play games, with the common differentiating factors being your personality and/or skill level*. BUT. Add another ingredient into the mix, and you’re something wholly unique, with a much higher chance to stand out and find success.
*Nothing against Let’s Play-ers! I love you all! But let’s admit, it’s competitive as heck out there.

Here are a handful of YouTubers who are killing it in their respective niches and have created huge followings by combining their love of gaming with something else they love or are good at.

Daryl, in his own words, “[has] a Bachelor’s degree in psychology and [has] spent more hours with a controller in [his] hand than [he’d] like to admit.”

These two things make a potent combo that resulted in his channel, Daryl Talks Games (founded in 2017), earning 218,000 subscribers and well over 11 million views at the time of writing this.

In Daryl’s videos, he marries psychology and gaming to help us understand games and our experiences with them better. Why we love them, hate them, or are creeped out by them (Anyone else really hate a 4th wall break? No? Just me?).

Here’s a recent example where he talks about personality traits and how they correlate to the kind of games we enjoy:

In each video, he examines scholarly research on each topic and builds his own analyses as they relate to games.

I’m making it sound a little like a college elective right now, but the end product is actually entertaining AND educational!

There are many takes on music. You can analyze it. Review it. Make playlists. But the most literal is to…play it.

Enter, Family Jules. He’s a guitarist that makes metal covers of popular video game songs. He’s been around since 2008, has 458,000 subscribers and over 100 million video views.

For an epic example of his work, check out this video featuring 46 different covering the history of games from 1972-2019:

His videos are usually footage of him playing the guitar and bass parts for each song, occasionally sprinkled with game footage. I especially like his collaborations with other artists and even voice actors from the games on occasion.

You can build a successful gaming YouTube channel on this concept no matter what instrument you play (including your voice)!

VaatiVidya is known for his impressive in-depth lore videos on Soulsborne games (Dark Souls, Bloodborne, Sekiro, etc.). Whether you’ve played a Soulsborne game or not, it’s clear that his videos hit a chord with people. He boasts 1.71 million subscribers and over 339 million views since launching in 2012.

If you have played a Soulsborne game, you know that the lore in the game is notoriously vague and hidden throughout cryptic optional dialogue and item descriptions. They won’t serve you any exposition on a platter over there.

That’s where VaatiVidya comes in. He deep (and I mean DEEP) dives into the lore of each game, dissecting characters, settings, and plot points that help players finally make sense of every cryptic bit they receive while they play. Bonus: He has a soothing Australian accent to carry you along for the ride.

For an example, here’s the current featured video on his channel, Dark Souls Lore Explained:

Soulsborne games aren’t the only ones that can benefit from lore explanations either. Games only have so much time to present lore, but there’s usually more to it than meets the eye if you look deeper. You can be a loremaster like Vaati and share that with the world!

Gaming + Booze: How to Drink

Depending on what kind of games you play and…I don’t know, how competitive you are? Gaming and booze go together pretty well. Greg from How to Drink takes it to a whole new level by creating artisan cocktails based on game characters and items, mostly potions and actual in-game drinks.

Now, before you go exploring his channel, disclaimer: He doesn’t do ONLY games. He also does geeky movies and TV shows, tabletop games, and more. BUT, I still give him a pass for this article.

If you don’t believe me, check out one of his most recent videos to create a cocktail for Jackie Welles from Cyberpunk 2077:

You’ll notice that what makes him special is that not only does he have ungodly expertise in crafting cocktails, but he also actually plays the games and considers every minute detail about the character or item when selecting ingredients. This makes his drinks tasty, and his videos really fun to watch! Who knew it could be this entertaining to watch someone make a cocktail for 20 minutes? …but it is.

It’s the perfect marriage of two passions into one amazing channel, and his numbers show the same. He’s been around since 2015 and has 1.25 million subscribers, plus 110 million video views.

Tier Zoo is easily one of my favorite YouTube channels. This channel is what inspired this post in the first place, if I’m honest. The creator’s (I wish I could name him, but I failed at the internet sleuthing for this one) mission, in short, is to “get gamers interested in zoology.”

Tough sell, you say? Think again. He presents wild and educational animal knowledge in the famed Tier List format that most of us are familiar with by now. Animals aren’t just animals. They’re character builds that must be carefully considered for their various stats, like speed, intelligence, stealth, power, and more.

You wouldn’t want to be stuck with an F-Tier dinosaur, would you?

Just like How to Drink, you can’t pull off a concept like this without serious passion for both gaming and, in this case, zoology. He uses terms that will ring familiar to any gamer, talking about animals in terms of team strategy, different patches (evolution), and the overall “game” meta. He’s not kidding around.

Unsurprisingly, it hits. Tier Zoo has only been around since 2017 and has 2.51 million followers with almost 220 million views. Yep. Combining zoology and gaming is not only clever. By the numbers, it’s hella lucrative too.

I say “history,” but the Gaming Historian is so much more than that. Norman Caruso’s channel channels (see what I did there?) his love of gaming history, research, storytelling, and documentary filmmaking. So, he’s a man of many passions…including gaming. Obviously.

Each of his videos is a mini-documentary on a particular game, system, hardware, or era. His research is absolutely exhaustive. For example, if you watch the video above, there is literally nothing you won’t know about Super Mario Bros 2. Each video is filled with a deep passion for research and gaming history, with pieces of interviews, news articles, events, game footage, and more to give you a full picture of whatever subject it covers.

Of course, these videos take quite a while to research and produce, so Norman releases a video roughly every 2 months and still has a following of 816,000 people with 94 million views.

With 13.9 million subscribers, it’s entirely likely that The Game Theorists is already on your subscription list. If not, MatPat is closing in on 3 billion views, so it’s even more likely you’ve seen at least one of his videos.

Like the other channels on this list, MatPat is never shown playing a game. Nope. He spends each video deep diving into all of the nerdiest game theories on the internet, like this one from Five Nights at Freddy’s:

He doesn’t build a successful gaming YouTube channel by combining two unrelated passions like Tier Zoo or How to Drink. Instead, he taps into his passion for two things: 1) Wild game-related theories and 2) The community around those theories.

He’s actually kind of the opposite of the above channels because he doesn’t show up with knowledge. He shows up with questions and a relentless pursuit of answers.

You see, along with his own questions and theories, many come from his own comments section or elsewhere on the internet, and he puts in the work to fully research and get to the bottom of each one. If there is a bottom. Sometimes he just has to get as far as he can. That doesn’t matter much when every video is informative and entertaining (do you see a theme here?).

Unlike the other combos on this list, game theories don’t necessarily require a separate degree, skill set, or extra knowledge. Just a passion you’re willing to apply to something new or unknown! We all have at least one of those, right?

All in all, I hope this sparks some inspiration for other ideas you can mobilize to build your own success as a gaming channel on YouTube.

These are only a few of the unique ideas out there. In fact, there were a few more on my radar that I couldn’t even get to in this article. They’re definitely worth checking out if you still need inspiration:

To use a cliché, the only limit is your own creativity. While there may be plenty of examples and information on building yourself up as a Let’s Play channel, taking the time to brainstorm some other combos of what makes you unique as a gamer is well worth the time and effort.

So, what’s your unique passion or skill? Let me know in the comments below. We can even brainstorm some ideas together!